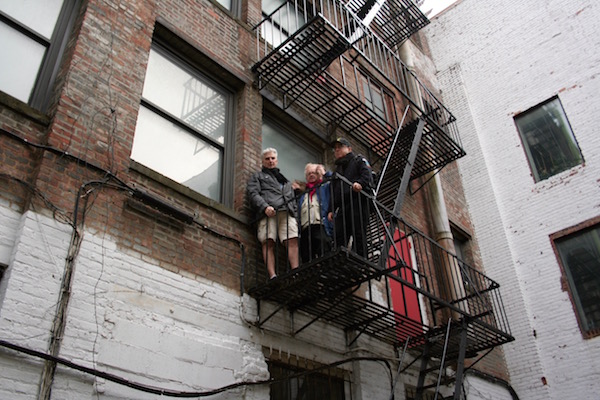 BY EILEEN STUKANE | Over the decades, residents of 517-525 W. 45th St., a complex of five buildings of various heights, have outlasted a turnover of owners who thought they could harass tenants into leaving their grandfathered loft dwellings. The wave that is breaking over the city — tenant harassment by landlord construction — had already toughened the W. 45th St. residents, who were alert to change and ready for the new owner, Offir Naim, who purchased the complex in July 2014.

They soon learned that his plan was to construct additional stories on their buildings to make them all taller — however, they felt the owner’s NYC Department of Buildings (DOB) application for this work contained fraudulent information. The burden of proof rested on their shoulders, but tenants say that even with proof in hand, their major difficulty is what seems to be a lack of interest by DOB officials to acknowledge falsified documents and halt an approval process, signaling a system badly in need of change.

Led by Tom Cayler of 525 W. 45th St., residents have become involved in trying to correct falsified application information provided by the owner and his architect to the DOB — information that misidentifies the actual heights of their buildings. Being in the Special Clinton District, the buildings have a height limit of 66 feet or seven stories (whichever is less). When the owner’s architect, Daniel Bernstein of Kutnicki Bernstein Architects, submitted plans to the NYC Loft Board to comply with required codes for the eight Interim Multiple Dwelling (IMD) units — the grandfathered lofts in the 18-unit building complex— it was revealed that these plans were also going to the DOB as part of an application to add two stories to the four-story 517 building, and one story each to the five-story 521 and 525 buildings. Their application claimed that, in the end, all three buildings, as measured from the curb, would top off at 64’11”. (Bernstein has not responded to repeated email requests for an interview.) For the full article, click here.