In celebration of Valentine’s Day, let’s show our Council Members some love…by sending them some amazing e-cards!

Below, you’ll find some amazing Valentine’s-themed STS e-cards which y’all can send to your local Council Members, kindly reminding them to please pass our 12 STS bills regarding construction-as-harassment. If possible, please take some time to e-mail your local Council Member one or a few of these fabulous e-cards. It will only take a minute or two! On a mobile device, click to enlarge each image then choose a Share option, or on your desktop you can right-click and choose Save As.

250+ community members attended town halls in Manhattan and Brooklyn last month to raise awareness about landlords’ use of “construction as harassment.”

New York, NY – New York City council members sponsoring legislation to reform and strengthen the Department of Buildings described their initiatives to address issues raised by tenants who have been victims of brutal harassment from their landlords involving aggressive, dangerous, and frequently illegal construction in their apartment buildings.

On January 10, Manhattan Borough President Gale Brewer was joined by 20 elected officials and tenants from across the borough at the Manhattan Municpal Building.

SOHO tenants recalled the horrors of landlords doing work with falsified construction permits, with some landlords claiming buildings were vacant or unregulated when there were, in fact, rent-regulated tenants still living in the building at the time of the construction.

Henry Dembrowski of Lower Manhattan said “Construction as Harassment is a poison in our city and we need to work together through legislation [to get rid of it].”

A tenant from the Toledano Tenant Coalition from the East Village named Holly Slayton highlighted the problem of uncollected Department of Building fines, saying “the Department of Buildings has a billion dollars in fines due to them.” Slayton strongly supports bills Int. 0930 and Int. 0931, sponsored by Council Member Kallos, which would make ECB fines lien collectable, meaning the city could foreclose on a building that had racked up too many unpaid violations.

Prime Stand for Tenant Safety bill sponsors Council Members Antonio Reynoso and Rafael Espinal spoke to the necessity of their bills and the entire package.

“These [bad acting] landlords just don’t care. The cost of doing business is not even worth a life to them. Landlords are making money as they break the law and this legislation can change that,” said Council Member Reynoso on his three bills to create a watch list of contractors who do construction work without a permit and to increase fines for doing work without a permit or after receiving a stop work order.

Tenants from across the borough – from Greenpoint to South Brooklyn and everywhere in between – described the trauma of having their buildings demolished while they were still living inside. Phil Smrek is one such tenant. He spoke in favor of a strong Real Time Enforcement. Smrek described being passed between 311 and 911 operators over and over when he tried to make a complaint about construction workers entering his building at night with sledgehammers and without permits. Due to bureaucratic back-and-forth and red tape a Department of Buildings inspector did not come to the building until many days later when it was too late to stop the illegal and hazardous construction.

A Real Time Enforcement Unit in the Department of Buildings could have protected Smrek and his neighbors by conducting inspections for complaints about work being done without a permit within two hours of the receipt of the complaint, inspecting buildings doing significant amounts of construction within five days of the start of the construction work.  The STS Package of bills includes one which would create a Real Time Enforcement Unit.

During the Brooklyn Town Hall, Council Member Mathieu Eugene promised to sign all twelve bills. To make sure this desperately needed legislation is passed this session, tenant across the city were urged to speak to their local representatives.

Due to the popularity of this event, we reluctantly must limit participation. We cannot accept new RSVP's and if you attend without an RSVP, please be aware that you cannot be assured a seat. We are planning a similar event in the Spring.
If you'd like to be placed on a waiting list or to be notified about future forums please email Harriet Putterman at [email protected] . Thank you for your interest and please stay in touch with the Stand for Tenant Safety Campaign by visiting www.standfortenantsafety.com. 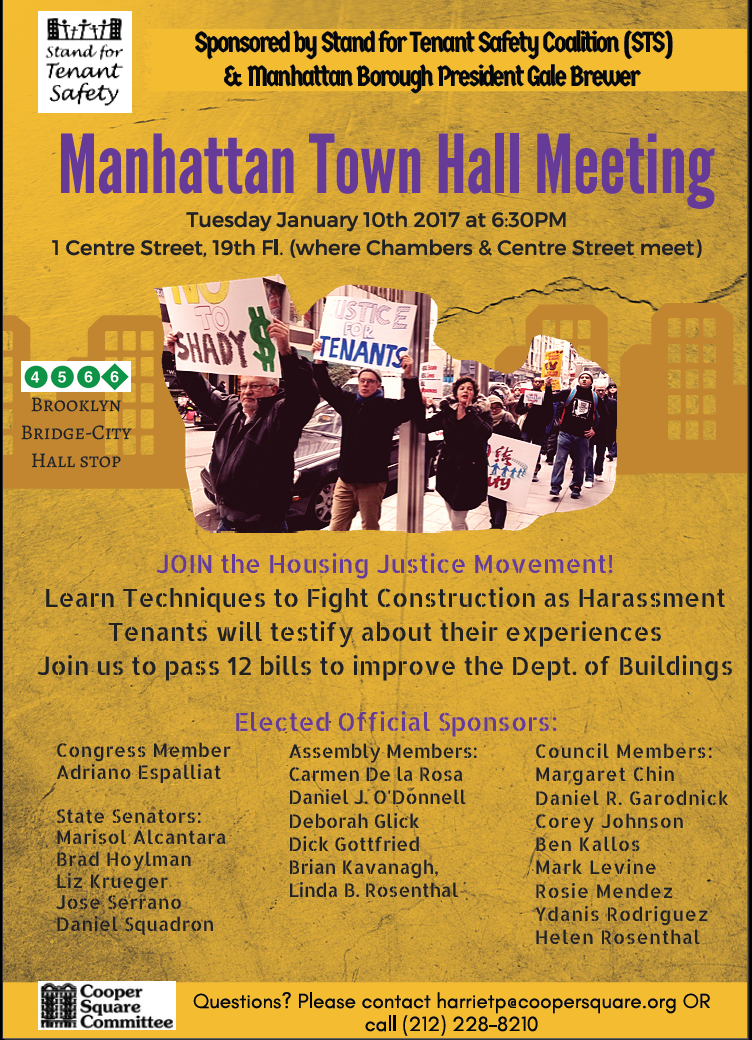 A.G. SCHNEIDERMAN FILES LAWSUIT AGAINST PROPERTY MANAGEMENT COMPANY AND LANDLORDS FOR HARASSING TENANTS IN CHINATOWN AND THE LOWER EAST SIDE

Joint Investigation Between A.G. And Governor Cuomo’s Tenant Protection Unit Uncovers Alleged Deceptive And Illegal Conduct and Harassment -- Such As Engaging In Sham Legal Proceedings -- Against Rent-Regulated Tenants In Order To Coerce Tenants Into Signing Away Their Housing Rights

Schneiderman: No Tenant Should be Subjected To Unsafe Conditions, Harassment, Illegal Evictions, And Other Conduct That Violates The Housing And Rent Laws

NEW YORK – Attorney General Eric T. Schneiderman today filed a lawsuit against Marolda Properties, Inc., (“Marolda Properties”), a Manhattan property management company that manages rent-regulated apartment buildings in the New York City metropolitan area including in Chinatown and the Lower East Side, and affiliated landlords that own the buildings. The lawsuit is the result of a joint investigation between the Attorney General’s Office and Governor Andrew M. Cuomo’s Tenant Protection Unit.

The lawsuit, filed in New York Supreme Court, alleges that Marolda Properties and the other defendants improperly sought to evict rent-regulated tenants by serving notices and bringing proceedings in housing court falsely alleging that the tenants no longer occupied the premises as their primary residence.  The lawsuit also alleges that defendants refused to renew tenants’ legally-required leases, overcharged and failed to account for rent paid by tenants, did not conduct necessary and proper repairs and renovations, and engaged in other harassing, deceptive and retaliatory behavior.  The suit seeks a court order prohibiting defendants from engaging in these kinds of practices in the future, directing them to pay damages and/or restitution to tenants who were harmed, disgorge all profits that resulted from their illegal practices, pay penalties for their illegal conduct, create comprehensive policies for employees to follow and engage a third-party administrator to monitor compliance with the law.

“No tenant should be subjected to unsafe conditions, harassment, illegal eviction and other violations of the housing and rent laws,” Attorney General Schneiderman said.  “Unfortunately, some landlords believe they can get away with using these tactics to coerce tenants out of their apartments so they can then raise the rent.   My office will continue to partner with TPU and other government agencies to do everything in our power to put a stop to these types of unlawful practices.”

“New York State will not tolerate landlords who profit from unlawful schemes and prey on vulnerable New Yorkers,” Governor Cuomo said. “We created the Tenant Protection Unit to ensure that those who seek to extract exorbitant rents from tenants in rent-regulated apartments will be held accountable and this lawsuit is a testament to its success. We are committed to preserving affordable housing units and protecting the tenants who live in them, and this action sends the message that we will continue working to root out this unscrupulous behavior and create a safer and fairer New York.”

New York State Homes and Community Renewal Commissioner James S. Rubin said, “This joint investigation between the Governor’s Tenant Protection Unit and the Attorney General brings the full weight of the state’s resources to bear on landlords who use harassment schemes in an effort to vacate rent regulated apartments and break up tight-knit communities. It’s wrong and it stops here.  We’re fighting for the rights of tenants in Chinatown and the Lower East Side and across the city to stay in their affordable homes. The Tenant Protection Unit will continue to work hard to combat landlords who are trying to use the court system as a vehicle to harass and evict their tenants.” The affiliated landlords named in the lawsuit include Green Leaf Associates, LLC, Forsyth Green, LLC, Forsyth Blue, LLC, 83-85 Baxter Street, LLC, 7 Rivington Street, LLC, 90 Elizabeth St., LLC, Ludlow 65 Realty LLC, 13-15 Essex Street, LLC, 145 Ave. C., LLC, 100 Forsyth Associates, LLC, and 1 Bk Street Corp.

The lawsuit alleges that defendants served tenants with notices (called “Golub” notices) that stated that the tenants did not actually live at their apartments and that an eviction proceeding would be filed if the tenants did not leave voluntarily at the end of their lease.  Defendants frequently had little or no evidence to support their claims.  In fact, database searches relied on by defendants showed the tenants did in fact live in the apartments they claimed to live in, or merely showed that the tenants had lived at other buildings many years earlier.  The notices and lawsuits were also frequently based on conclusory claims that the landlords’ employees had not seen the tenants around their apartments for an extended period of time, when in fact many of the tenants frequently come and go from their apartments and sometimes even see the landlords’ employees on a regular basis. Defendants used these tactics to wear down their rent-regulated tenants, many of whom are elderly and do not speak English fluently, into leaving their apartments, sometimes in exchange for additional payments.  Once the apartments are vacated, defendants may raise the rent under the rent regulation laws and thereby increase their profits.

The lawsuit further alleges that defendants failed to file with DHCR the required annual registrations for some of their rent-stabilized buildings, have engaged in construction, renovations and repairs on their buildings without the legally required permits, and on other occasions have signed statements on their permit applications falsely claiming that the buildings are vacant.  This allowed them to unlawfully evade the legal requirement to create a tenant protection plan specifically designed to safeguard the safety and health of their tenants during construction.

The lawsuit also alleges that defendants have at times locked tenants out of their apartments, engaged in unnecessary or unnecessarily burdensome and lengthy repairs and on other occasions failed to engage in necessary repairs, sometimes leaving tenants with substandard, unsafe and unsanitary housing conditions.  For instance, the lawsuit alleges that certain tenants living at 13-15 Essex Street in the Lower East Side are presently forced to pay for and use slow, ineffective and in light of the electrical wiring in the building, potentially dangerous store-bought hot plates to cook and heat their food, because their gas has been turned off by the landlord since February of this year.  At the same time, these elderly tenants, one of whom has a disability, are forced to climb three flights of stairs to use an alternative restroom because their own toilet was removed in August and never replaced.

An investigation into defendants’ practices was originally initiated by the Tenant Protection Unit (“TPU”) of the New York State Division of Housing and Community Renewal (“DHCR”) after receiving complaints from various non-profit organizations that work with and in the tenants’ neighborhoods.

Since 2012, the Tenant Protection Unit’s enforcement activities have led to the registration of over 53,000 improperly deregulated apartments and the recovery of over $2.8 million dollars in overcharged rent for unsuspecting tenants through settlement agreements and administrative proceedings.

Tenants who believe they are the target of unlawful, deceptive or harassing behavior by landlords or their agents are urged contact the A.G. in order to file complaints online or call 1-800-771-7755.  Tenants who live in rent regulated apartments and feel they are being harassed should also also contact the TPU at (718) 739-6400 or [email protected]. 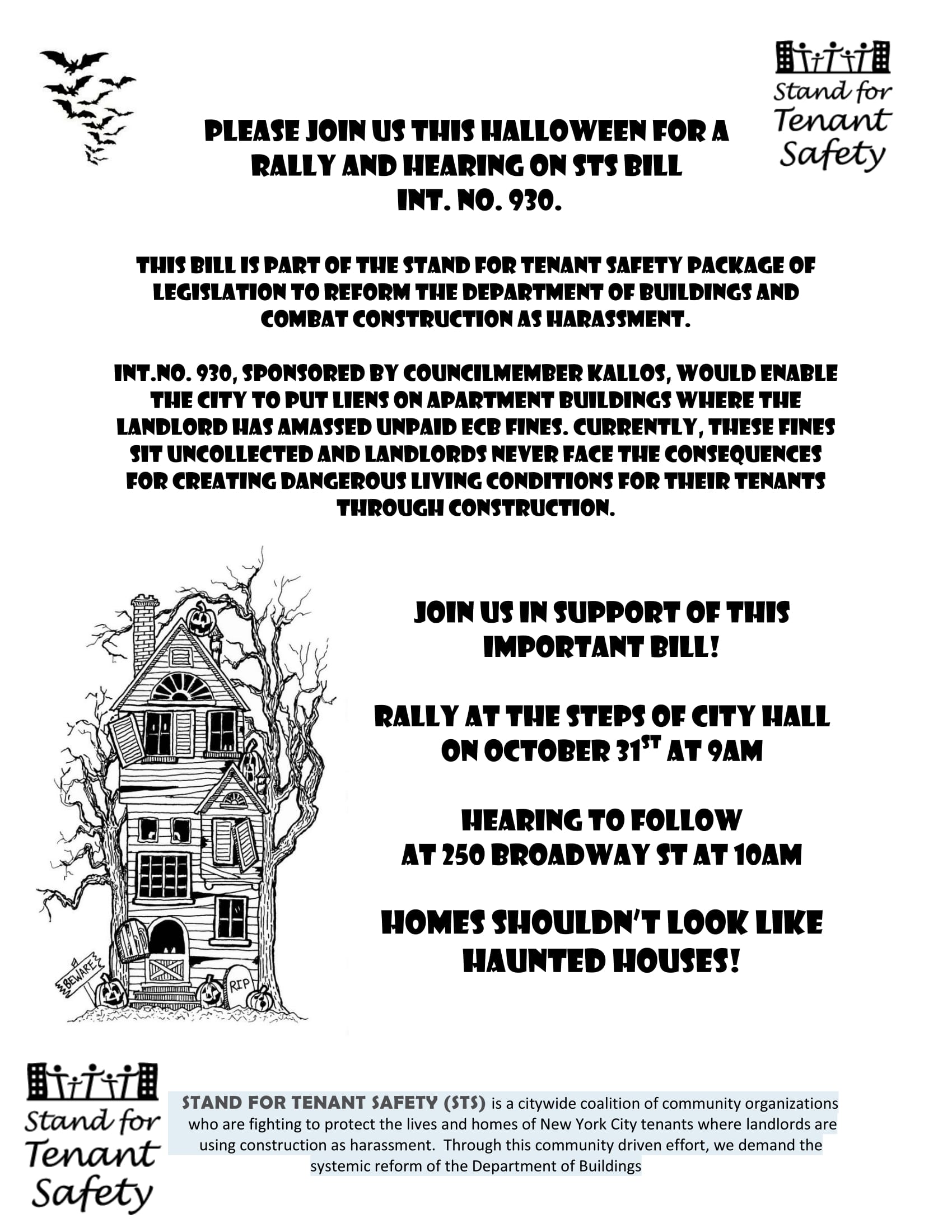